The people who compose the Alliance of Commons are not, neither seek to become, a uniform community. We come from different starting points, paths and worldviews. We approach the commons from different perspectives, experiences and practices, such as those of our personal mood for sharing and co-operation; personal and collective creativity; equal opportunities; social justice and equality; political participation and democracy; rejection of all arbitrary power; opposition to exploitation; ecology; anti-racism; feminism and critique of patriarchy. We value this diversity of ours as a fundamental feature and empowering element of the Alliance.

We are united however by the desire for joint activation. So, some of us have organized meetings, festivals such as the Commonsfest, conferences and workshops on cooperation, production, the environment, innovation, networking of social initiatives. Others are engaged in struggles against the fencing of goods such as water, energy, public spaces and knowledge. Many of us are giving life to self-organized solidarity structures for health, food, shelter, education. That is goods to which everyone is entitled. Some have done whatever we could to influence politics in the direction of empowering projects with a positive social impact. Several have a long history within movements and political action from the grassroots. Others again do not. Some represent specific productive and social groups, organizations, perceptions. Others again represent simply our common need for creation and way out of the imposed social catastrophe. More specifically, a way out of the failure of the binary: ‘state and market’, as we are currently experiencing it in Greece of the crisis, just as many other people on the planet, and are seeking more sustainable alternatives.

All of us however seek a way out of the logic of outsourcing our economy, politics and our lives to specialists, middlemen, professional politicians. Instead, we seek answers and solutions to our everyday problems through active participation, collective knowledge and support for the anthropocentric economy of the commons.

Finally, we perceive our action and the Alliance of the Commons as part of a wider movement that is activated locally but is coordinated and strengthened globally for the good of humanity. We are in solidarity with contemporary movements to defend and spread the commons in every corner of the globe. We desire the co-ordination, networking and community-based production, together with any other community that is contributing to the production of common goods, aiming at the open and without space-time restrictions on circulation and accumulation of value for the commons.

Why do we care about the commons?

In the crisis, another world is not only feasible but already existing. Throughout the country, initiatives have been born in every aspect of production and of our lives. Traditional seed distribution networks, farmers’ cooperatives and ecocommunities, horizontal food solidarity networks and no-middlemen markets, social pharmacies and clinics, social and cooperative learning centers, conservatories and daycare centers, cooperative power plants, community electronic communication networks, social waste management movements, open community and cooperative media, open knowledge and technology production communities, occupied factories and workplaces, free social spaces and places of solidarity for refugees and immigrants, social cooperatives in every area of ​​production and distribution as well as movements of advocacy and expansion of the commons.

Our goal is to empower this world, to contribute to its maturity and to mature ourselves along with it so that it can be a realistic alternative, while we are building a society geared to our common needs and desires. A world where the satisfaction of the desire of one is not at the expense of the other. Where there are neither winners nor losers because we recognize that our prosperity depends on that of our fellow human being. Especially in the current period of the generalized and systemic global crisis (economic, ecological, political, but above all a crisis of the dominant norms and values), there is a dire need for further development and valorization of what we call the “economy of the commons” as an anthropocentric, ecologically sustainable and rational system of productive and social organization.

By “commons” we mean practices of joint production and management of material and immaterial goods on the basis of sharing, cooperation and democratic participation. The joint creation and / or management of social and intellectual wealth by the communities of its creators and users. For us, commons are primarily the act of “communion” and the community relations which it builds. We feel as relatives of the commons and the practices of peer production and social and solidarity economy. The economy of the commons is already operating alongside the state and the market, but at the same time constitutes a comprehensive social proposal with possibilities for overcoming them.

Why the Alliance of the Commons?

Because the production and management of goods as commons can be efficiently effected through cooperation, distribution and through the processes of participation of many towards the common interest.

The dominant system, based on perpetual profitability, is in rivalry with the economy of the commons. It encloses the basic social goods so as to exclude society from its free access to them, to manage them on its own behalf or to market them. With its inherent tendency towards perpetual economic growth, which has reached its limits worldwide, it continues to guard and exclude from free access goods that exist abundantly in nature (e.g. immaterial goods of intellect). At the same time, it appropriates and overexploits the finite resources (forests, minerals, etc.) and promotes the overexploitation of produced material goods, depleting rapidly the natural resources of our planet.

In this absurdity and the subsequent impasses of the system, society reacts and comes together again around the commons, developing and expanding it. Through our collective efforts, we aim to set up tangible examples of the economy of the commons in action in every region of the country and in every sector of economic activity. But that does not mean that there is wider awareness of the value of such initiatives or of the scale they could obtain. At present, many of these initiatives are pools of cooperativism and solidarity in a society that is concerned whether the commons are a serious proposition, being itself confronted with urgent living problems, the collapse of traditional forms of welfare, as well as suffocating dilemmas from above.

We believe that discussions and practices developing around the commons are already forming innovative and promising models for an organic development of economy and society in a sustainable direction.

What are our principles?

A new world has emerged through the crisis and has turned in recent years towards production based on the commons and social and solidarity economy. Faced with the deadlocked financial-centered system, it opposes a new anthropocentric system of values, which puts forth:
* cooperation rather than competition,
* sharing and reciprocity, instead of exclusion,
* sharing skills for the common benefit instead of individualism,
* solidarity instead of indifference and isolationism,
* active participation in collective decisions rather than acceptance of a future that others make for us,
* ecological value and sustainability rather than overexploitation and depletion of natural resources,
* self-management, autonomy and self-sufficiency.
* Fair trade without intermediaries and the solidarity market.
* the defense of the commons against enclosures and their promotion as a basis for a development of human, nature and economy.

These principles, along with others that will emerge from practicing the commons in the future, are perhaps more important than the resources themselves which we are called upon to produce and manage together. In this sense, the commons are not just social relationships around resources. They are also a new ethos and a political momentum that stems from our active participation in the economy of the common people, and with the intention of transforming the entire society.

What Are Our Goals?

The Alliance of Commons has the following objectives:
– Claiming as “commons” (not just as public property) all specific commons-related small and large-scale infrastructures.
-The study and evaluation of the commons, the systematization and dissemination of the knowledge they produce and, finally, the implementation and dissemination of best practices in existing and new initiatives around the commons.
– Networking and co-ordination of people and initiatives involved in the commons and the establishment of social structures that will effectively claim the application of such a model in every space.
⁃Cooperation for the creation of common resources, technical and economic infrastructures of support for the commons.
-The reinforcement of existing initiatives around the commons and the ongoing effort to produce new ones through collaborations and partnerships with all stakeholders.
-To cooperate with any available political, economic, scientific or activist initiative to set up a production-consumption-governance model applicable on a national or supranational scale.
-The production of discourse and policy for the acknowledgement of the social value of the commons and the dissemination of commons-based practices in society.
-The defense and widening of the commons of the country.
-The coordination of social actions aiming at creating the right conditions for the commons to thrive as well as the practices and values ​​produced around them.
-To develop the commons as a comprehensive sustainable political, economic and social proposal with the ultimate goal of a society that is oriented towards the commons.
-The creation and widening of material conditions and processes for social empowerment and integrated human freedom.

What are we doing?

The Alliance of the Commons is not a substitute for any initiative but is a point of encounter and empowerment, of networks, initiatives and movements. It is an alliance that can add to, and not deduct from, a bold attempt to overcome the material, social and political conditions that are a bottleneck, through building the commons perspective and a vision against pessimism and “realism.”

We want our autonomous organization without assignments and representations through:
-the creation of the open coordination body of the Alliance.
-the creation of open working groups for different themes (both vertical e.g. thematic clusters as well as horizontal e.g. groups on legal matters, technical support, promotion, etc.).
-valorization and use of all existing Alliance members’ infrastructure to promote common goals and achieve actions.
– the organization of regular open meetings of the Alliance on the subject of discussion, information, networking, productive partnership, planning and coordination of the policies and productive actions of the Alliance.

How can you participate?

If at work you advocate cooperation rather than competition.
If in your daily relationships you prefer to share, rather than exclude.
If you wish to allocate your abilities for the common good.
If you function in solidarity with others.
If you are an active citizen and want to participate in the decisions that concern you.
If you are deeply concerned about the ecological crisis and want a more sustainable lifestyle.
If you believe in collective efforts to resolve common problems. If you are disappointed with mediation and you want to take things in your hands.
So, if you are one of the above, then you are part of the solution.

Communicate with us at our general or local assemblies, in the social initiatives where you will meet us, or through our website.our website 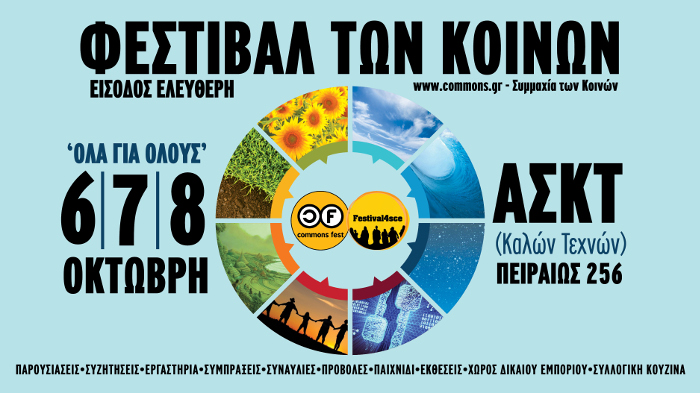